Nobody liked it when I put my art to the story, when I invented quaint reminiscences and honorable intentions when if fact there were moments of quite the opposite. At family hoedowns we generally did tunes that you could recognize only when strangers were present Strangers would tap their toes and generally feel a great bon-homme with us, a bit of the old family history here, a fiddle and a guitar and three-part harmony.
When there were no strangers present, however, when we were in the kitchen and we took out the fiddle and bow, we all took to howling our own sweet tune, in different keys and different lengths. Aunt Mad almost perished when she fell behind the ice box reaching for the fly-swatter, and wasn't noticed 'til it was her turn to testify and the dog gave us the news.
There was never going to be any contentedness, never expected it. Perhaps the only wish was for a few of the old family snapshots, the great uncles and the grandparents in various forms of bathing gear, gathered at the swimming hole, a rocky area under the railroad trestle, where, at a much later time, my Uncle Floyd died, leaping off a boxcar at night. Home again, at last, after many years traveling, even to the Orient, Floyd rode the rails home only to forget that the railroad trestle had no railings, was just a black hole in the night, complacent with other black holes; all constructs of rural night time; and he leapt off the train as it passed over the trestle; and Floyd came home to be buried, along with the rest of our family at Union Cemetery, in Colbourne. All this stuff, the pictures, the stories, is the patina of life as resurrected from the advantage near the finish line.
They all want to shout out: tell my story, tell me. I demand to be heard, shouts the council of large words, and so you do, and so you do. I'll expand a bit and include large words, hippopotamus. There was never going to be any contentedness, I never expected it. Even in the snapshots from 1946 you could see the tension in the air. There was the whole, unresolved, war-bride issue, for example.
Blood information, this intricate stuff, I believed in. How a piratical gleam can stay in the eye for centuries amongst certain clans, on the frontier for example. I felt that I knew stuff for no apparent reason. Never read that before, never saw that in any orchard I'd ever visited and there had been many after all. Part of the blood speak was about orchards, and the family acres of vaulted beauties. McIntosh's trees, lined up like stable rows, doors open on the top half. Honest, homely faces, promising winners. Take these metaphors and start slapping them around, orchards slapped up into fiddles, and farm houses with verandas on three sides, a very sporting arrangement considering there were long periods of time where the blood speak became blood-feud and on special days, on Sundays for example, the bigger the veranda the better.
And on the veranda, fiddles were brought out after a while and the scrapping and the hooting and jigs were danced by ones who could be haughty if they wanted to. These lunkers high stepped and the hooting only grew still as twilight came on, the place emptied, shadowy piece by piece, till only I was left, a shadow of not quite the same hue.
-excerpted from “Notebooks From The Emerald Triangle” 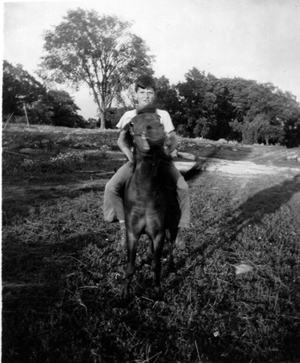 Bill Bradd was born to farm people in Muskoka, Ontario, Canada. As a young man, he drifted, worked the oil fields in Alberta and bartended in New York City. In 1967 he arrived in California where he lived for a time in the Big Sur area, then migrated further north, became an active member of a thriving community of writers and artists in the North Coast area of Mendocino and has remained there ever since. He has published two books of poetry, one of which, The Kingdom of Old Men, was named one of the best books of the year by Poetry Flash; a book of essays/memoirs; and three spoken word CDs. He was a major contributor to an oral history project for the Mendocino Historical Society, interviewing more than 100 people born before 1900 which provided a unique view into the history of the area. The project resulted in the book Mendocino County Remembered. His work has appeared in ZYZZYVA, Beloit Poetry Journal, Ashanti, Winter, Arts Canada and other journals and magazines. He taught for many years in the California Poets in the Schools Program. He is Poet Laureate of Ten Mile River.

In my head I have a bunch of performers wandering around on a stage where no play is being performed this evening. A cancellation due to bad financial planning caused a dimming of the light, where stage blocking became impossible.
"Here I am, no you were over there by the chesterfield, no,that's,who is that?
It's the author; the fool has wandered in from the street with a handful of script changes, which the wind carried off as he was getting out of the cab.
Later a small performing arts group, dancers mostly, began street performances based on some stray sheets of scripted notes apparently found caught on the industrial fence of an inner-city ball park, near the marina.
As the pages were unnumbered, a full scale "I think I'll be the banana in today 'performance " broke out. Granny wants to be the moon's shadow.
The author himself never saw any of these performances, never actually the right time, but a pal reported from the Outer Mission district that a church-basement choir was busy rehearsing a song dedicated to a cow named Bossy.


In our northern towns we were strung together like blossoms on a Spring bough, a patch of colour on a stretched limb of still, dark shadows. Old towns, used to be, shifts through time, movements, geography to geography, mythology kept name-places bare, suspicion, our least imaginative instinct.
Life happened in wildfire of mad moments. yodeling behind the barn into the winter night, howling our ancestral war cries ,carried by the wind of the North ,down the rolling hills, towards others of our own kind. Skating free on a frozen lake, all of our families,colourful measles on white snow and pale, pole-blue ice.
The ancient story was free from personal responsibility, using language, forged in the fields and the cathedral.

I seem to circle in and out through the information of my history, circling
Lower and lower, like a scavenger bird, each descent getting closer and closer to my real story.
What happens if the old stories are all gibberish to the young minds that will follow.
What if they find all this old-story stuff to be just so many words, like the Peloponnesian Wars, faded guys in faded suits; in dusty locations by the stinking sea.

I saw my landscape into a flatter view now, perhaps when the eyesight faces three-dimensionality is lost, but there seems to be less depth, the alder river trees, the sea birds the cats, all exist on one plane, I wonder if this is me also.
Then the cat jumps up and chases the files around the upper window. She balances on the coat hooks and reaches with her tappy-tap-tap but the flies stay close to the hot spot where the Winter sun comes crashing through, the cat wants to eat between meals, flies are not raisins my friend, remember the ant episode, you thought those little black bastards looked eatable.
Remember what happened next, you did a silly dance where an irate ant has grabbed you by the paw and is squeezing so tight you became a flying Walenda and dance your silly step right off the deck, flopping into the rhododendron bush below, before you ran off.
Ants and flies are not raisins. Not that you're that big on raisins, but if the morning bun falls on the floor and she dashes to inspect, raisins are missing.
I feel like Moses, I've led my little army of thoughts, ideas, curses, Armagedons, ill feeling, snarls and petrifications for over sixty years, led the charge uphill and skulked away when the battle went against us and I was forced to plot up another scheme that was going to save us all from the landlord. I feel like Moses, when he got to the Promised Land, he wasn't going to be going over. Take a seat lad, your kind, the bad skimmers, the Hoodoo smack talkers you, your lads will take a seat. The kids can go over, the bad boys and you, go to the valley over against Beth-pe-or. I see my landscape into a flatter view now.
The Nature of the Journey Makes us Unfit for the Arrival
It was hard to realize our time had passed, I'd been leading them for so long, now, they would cross the river and I'd stay behind. With my associates, we'll build a tent city, here at the edge, where can see 'em. On special days maybe, they'll bring the kids and relatives down to the shore and we'll all wave across to each other, two major lion groups roaring at each other over the chasm of time.
Bonnie hold the kid higher, I think grandpa is the dirty looking bugger there on the far left, hey, Harry is that you, grandpa, is that you, Harry, hold the kid higher Bonnie I think that's Grandpa, over there, those rags might actually be yellow, he liked that color, said it reminded him of dawn, grew to love dawn.
Maybe they'll bring the kids, at first. And the grand kids, of course none of them know why the old boys and me need this and talk will develop for them to move on, migrate further away, leave the river behind, I can see that. They'll be motivated by the same things that moved us, we want to wrestle with the immediate god of the instant. Room is required for that, lonely areas, great tundras, swamps, forests of rock and moss.
It's funny to guide this orb, my life, so far, then have it flattened against the side of a riverbank, giving me a kind of half-moon look, my beard is white, my hair is white, a kind of half-moon look when it rains I see myself when I drink. Over here we're carting the boys off slowly. Every few days another coughs to death. There's not a thing we can do. A bunch of us trudge out a few ways and burn the remains on the rocks. Black smudges on the pink rock surface. That's all that's left for us.