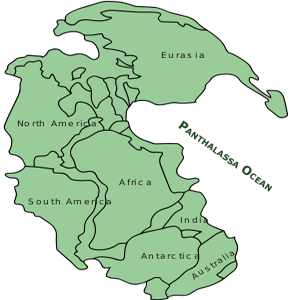 My idea is that when you are born you are one entity, one body a single geography with future boundaries, shoals, beaches, mountains,and mud-holes, one continent if you will, Pangea. which emerges from the Panthalassa Ocean, salt water of the womb.

As you move through time, though, Pangea begins to break apart, new continents are formed. You will move under a series of archways so vast you don't notice until later. You move from Youth to Middle Age and who noticed, except one day you are in a new place with unknown shoals and mud-holes. Time passes, then you are an Elder. Where even cutting your fingernails is difficult due to arthritis.

One of these new places within you is what I call the continent of ghosts, where all the people you used to know reside now. Some have passed away, moved away, or walked away, but who still live within you but are just no longer present. Except when I travel to their place via the Appian Way, 365 miles of memories.

To make this project viable to me, I decided to investigate the ghost of my mother, who passed away when I was two and of whom I have no memory. We were on earth together for two years but it's a blur to me. I pressed upon the blood memory, I went as far as I could and still be able to 'ground' the piece, put it in real, understandable terms.

The problem was I was dealing with a cipher, a ghost, needing to avoid Loki the trickster. I began to inspect the blood memory for any scent, any sound, any bird, aslant, any clue. I worked the senses for any dried rubber-boot pattern, I tried to draw forth any shadow of memory from the distant galaxy of my mind.
—Bill Bradd; 8-16-2013

Even as a kid I lived a frontier life. Now, at this late date I realize the frontier that I was living on was at the far edge of the ghost of my mother, deceased when I was two. I searched through the brambles, the early confusion about who I was, the erratic outlaw blunders I made, all took place on the frontier of a mind with a vague memory. I knew early that I was going to search alone, I just didn't know why, but I'd wander off, working the edge, betting it all. On the frontier of the mind, you are so fucking alone that you enjoy the company of ghosts. The difficulty is keeping the dialogue lucid.

My birth, that is

I thought you were coming back, but it was a trick of the wind I think, the roar of your full-throated passing, seemed to be going, then, it seemed to be coming back, towards me, in my direction, then, it was definitely moving away, to the north, your passing joining the migratory flight paths and I knew your passing was over the sky was empty
perhaps my birth was just a trick of the wind.